There’s a popular saying amongst cyclists (but probably not among their spouses/partners) that the optimum number of bikes to own is n+1, where n equals the number you currently have. Well here I am some three years after I started this blog and now I am having to add a further page to update you on the current current state of play of my bikes.

The winter after I got my Dolan was one of the worst on record for snow and ice, with a period of some eight weeks in which the track and many of the roads were uncycleable. Indeed, it was late February before I felt comfortable on the road on the skinny tyres. The solution was obvious:

And so a new baby entered my life – a rather swish Surly Cross-check.

Proud Mum of a wee Surly

Although a bit heavy, it did very well as a winter bike in 2011. Then, in a rush of blood I took the possibly ill-advised decision to use it fr the purpose it was built – namely Cyclocross. Now for those of you not acquainted with Cyclocross do the following: think of cross-country running but on bikes. Then add in a lot of mud. Or sand. Or both. That’s Cyclocross.

My debut took place on Halloween 2012. It went like this: it was mega: mega wet, mega muddy, mega long lap, mega cold, mega wet, mega windy. To add to the challenge, the terrain had a lot of stone beneath the surface. This meant that as you ploughed through the mud you could feel the bike hitting stones giving rise to the constant thought of punctures. Features on the course included mud, a ford through a burn, a muddy drainage ditch, mud, an old fallen wall, mud, high hurdles, mud, low hurdles – all amongst the natural rolling and rocky landscape which was pretty much covered in…erm…mud. I managed two laps of the course (the top guys did 5) which was actually pretty good as I’d had an ill-timed (or possibly well-timed) mechanical problem which meant I only had one gear. Not sure any more would have made much difference but heyho, it’s the taking part that counts. Here I am in action: 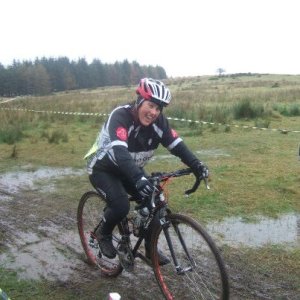 My next cyclocross event was actually a duathlon – twice as mad as just cyclocross as it also includes two running sections. Now I’m a great believer that if the evolutionary process had intended to turn me out as a runner, it wouldn’t have developed me as a wee short-legged large-chested morph, neither of which traits naturally lend themselves to cheetah-like running skill. i rather somewhat burst on the duathlon scene with all the aplomb of a middle-aged spinster at an inter-branch Women’s Rural knit-off. With a running style at times more reminiscent of Monty Python’s King Arthur and his knights than Liz McColgan, I found the run challenging. But I hung on to complete the course with only a modicum of cheating and to claim first place in the over 50, under 5’2″ category.

But bloody hell, the pics made me look soooo good. 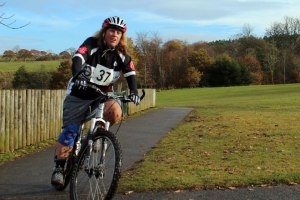 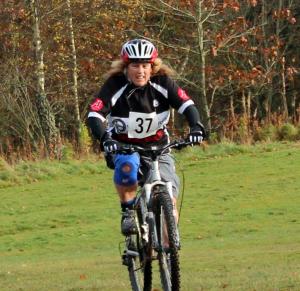