The Prologue
I have done several cycle tours over the past four years, most notably to Amsterdam and back where I made several friends with whom I have kept up thanks to that modern-day pen-pal system – Facebook.  When my Walkers club-mate Laura suggested a tour riding the length of the Outer Hebrides I was instantly interested – not just because I had been watching a documentary about them but also because I thought “200 miles?  Pfffft. Piece of cake after Amsterdam.”   I will admit to being a little daunted by the fact that my travel companion to be was half my age (literally), twice as fit (literally) and half my body weight (don’t go there).   However, with that customary difficulty I find myself having regularly, the word “No” somehow became Yes” by the time the air had travelled from lung to vocal chords and there I was committed. Or I should have been.  One set of borrowed panniers plus rack and a lot of trying to stuff in clothes and other necessities later, I was ready to go.  Now it was up to my legs to do the rest.

Day One: Over the sea to Skye. And Harris.
We set off from Glasgow Queen Street at an unearthly 7am on Tuesday August 6th heading for Kyle of Lochalsh. The weather was fine and sunny up as far as Aviemore when it started to get “atmospheric”, and by the time we reached the start point at the Skye Bridge, a slight drizzle had set in. Undaunted we pedalled off in the direction of Uig to catch the ferry over to Harris.  Now given that this was the first time I’d ever ridden with baggage attached (other than my usual bad temper and the psychological damage of five decades) my progress was remarkable swift over the piece. This was despite encountering the mountain that is the Skye Bridge within half a mile of setting off.  It was at this point that I finally understood the universal truth that weebles do in fact wobble but never fall down. With a deadline looming to get to the ferry on the other side of the island, I had to master the art of pedalling while counterbalancing the weight of the panniers very quickly. This brought about the realisation that the bike had transformed itself from a Surly into the Hercules Jeep of my youth: unstartable without a good hearty shove and/or a downhill slope, and virtually unstoppable once moving.  In an instant I remembered how it went and I was up and moving.  Now I do have to fess up to the first of our cheats here. Because of the very tight timescale to get over to Uig, we had pre-arranged a lift part-way between Broadford and Portree. Our cheat section was conducted by a large people carrier driven by a large person called Alistair (athough, as he was a Gaelic speaker, no doubt that would have been spelt Ealaisdearghagh) who regaled us with unsolicited information about his recent spell in hospital after being bitten by a pesky cleg.  We reached the outskirts of Portree about an hour and a half before our ferry was due to leave and Alistair bade us a fond farewell, but not before insisting on showing us his cleg wound which fortunately was in a non-embarrassing place.  The 16 miles or so to Uig were remarkable only because this was where I discovered Laura has a weaker bladder than even I have. The road was undulating rather than hilly, but the ferry terminal and the subsequent crossing were very welcome to let us recharge our batteries for the trip round Harris.

Our arrival at Tarbert, Harris coincided with a fly-past of every midge in the known universe, most of which seemed to be attracted more to Laura than me. I put this down entirely to an experiment I was conducting into the midge-repelling properties of the half tube of Garnier sunscreen I had slaggered on with encouragingly good results.  We also quickly discovered that midges are quite clearly deaf as not a single one of them seemed to hear Laura telling them where to go.  As we were facing a journey of some 22 miles to our lodging in Leverburgh and were armed with the knowledge that the first section was somewhat undulating, we had realized that we needed to crack on to do the journey before it got dark. We decided that we wouldn’t stop to take photos unless it was something absolutely amazing.  Hah!  Every corner we turned yielded up a view more beautiful than the one before, so much so that we just had to stop a couple of times.  We reached the guest house just as the light went, in time for a nice batch of home-made shortbread to come our way alongside a cup of tea. 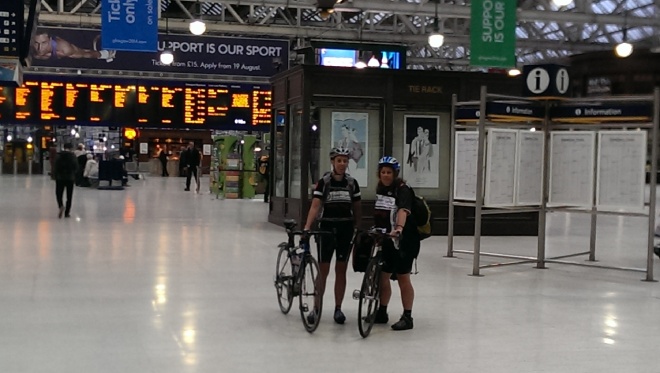 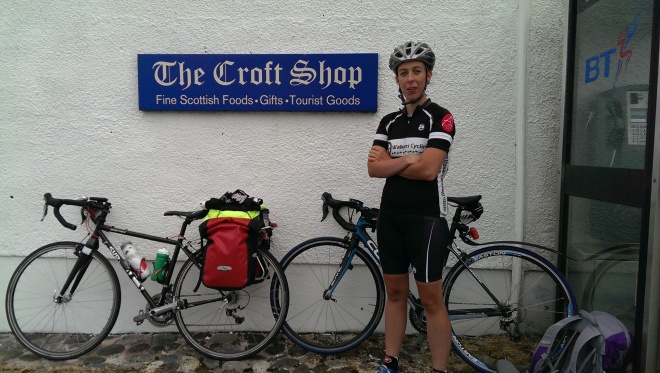 At Broadford on Skye awaiting the cleg-bitten Alistair 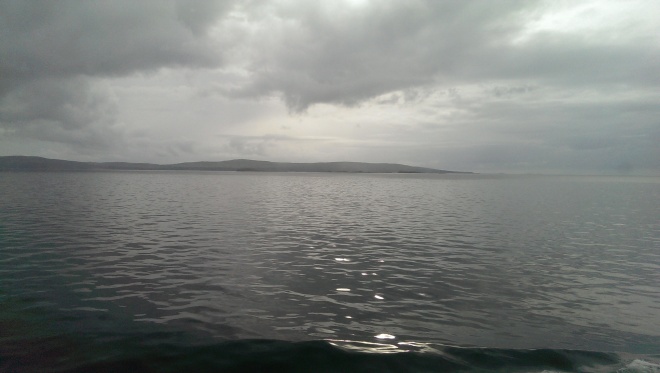 The calm trip over to Harris. 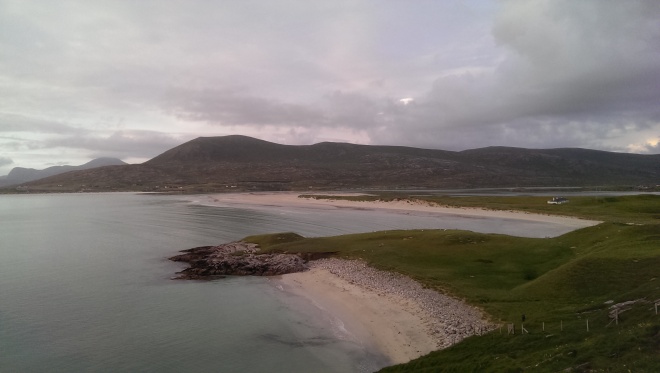 wonderful blue and green sea and white sand – even at 9pm. 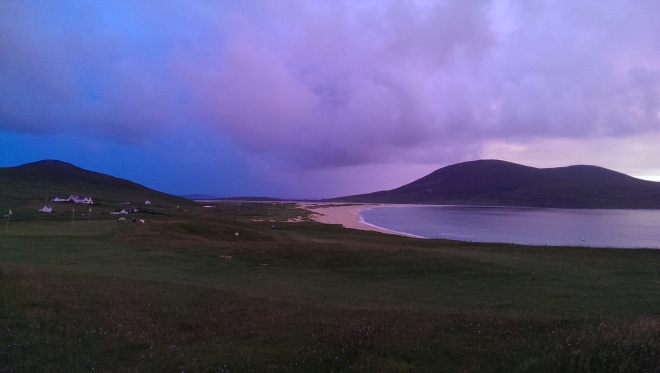 One thought on “Hebridean Adventure: Day One”