The Crow Road is one of the legendary cycling climbs in this part of the world. It is not the steepest of hills  – there’s a section of 12% at the bottom which lasts for about a quarter of a mile but after that it is just a long drag of a constant climb of between 5% and 9% that goes on for about three miles, going in that distance from 280feet to 1380. What makes it ouchworthy is that you get to what you think is the top only to turn a corner and be confronted with another half mile of up.

My first encounter with this entity was last year during the Trossachs Ton event and it was yet another of my classic comedy cycling moments. Just as I was priding myself on not having stopped, I noticed that the sheep in the field beside the road were actually overtaking me. And the wee buggers weren’t even running!  I do have to confess that my “not having stopped” came to an end fairly soon after that as I ran out of steam and had to put the foot on the ground for a breather before resuming.

With Jacky, Sandra and me all entered into this year’s event, we decided we’d have a practice run a couple of weeks before the event.  And I have to say that I was very pleased to note that I did it a helluva lot more easily than last year which I am taking as a sign of progress.  I remain not a very good climber but I am certainly much improved on previous years.  I did however, look a tad deformed as I hunched up over the bike. The pic is taken just after that turn I mentioned, so you can almost see the words “Oh ****!  There’s more!” on my lips.  😉 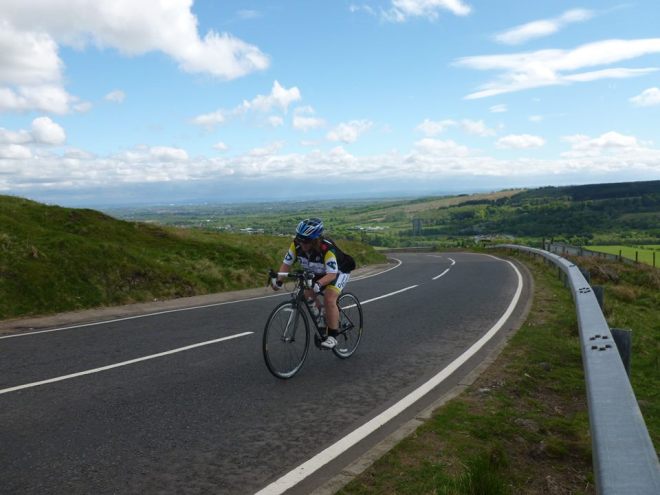 This was also the first outing for the Ruby and I have to say it handled itself very well. Pity about the rider.

So, armed with the knowledge that I could get up the Crow Road in a oner, I was looking forward to the actual sportive. And then of course the fickle finger of fate intervened with a chest and throat infection that saw me unable to speak for five days and unable to eat anything other than ice cream and lemon popsicles for two.  Sod’s Law indeed.

Although not by any manner or means 100%, I was feeling better by the Friday before the ride so decided “What the heck? Let’s just do it.”  Apart from anything else I was going a little stir crazy and the worst of it was past.   Jacky and I set out from the start point at Stirling High School at just after 8.15am and we made decent progress over the first 20miles despite my untimely episode with an escape attempt by my bottle cage.  There is something a little strange about having the “lunch stop” at 10am, so we decided to forgo the pasta and settle for a roast beef roll instead.  Replenished, we set off on part two of the route which we know well from our rides with the girls.  On this occasion we had glorious sunshine and only the slightest headwind, which was a pleasant change from our last two encounters with that stretch of road.

And then came the Crow.

I had decided that I was just going to take it gently and concentrate on getting up it – a sensible plan given that I wasn’t fully lurgi-free. And I did.  I have no doubt it wasn’t bonnie to behold but I made it. Jacky had gone on ahead and to add insult to illness, Sandra, who was doing the longer route, overtook me just at the summit.  And it has to be said that on my way up I overtook two blokes, one of whom was at least half my age (and was tall and skinny) so that did give me a rather perverse feeling of satisfaction.  By the time I got to the top of the first stretch I was able to flash a grin at the official photographer and I looked significantly less deformed that on the previous occasion. 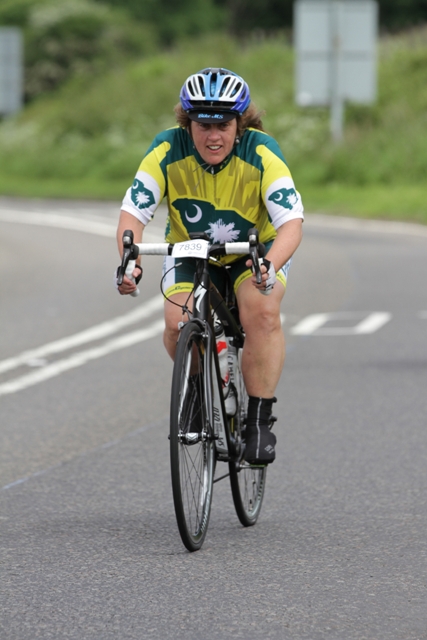 The ride down was not as easy as I’d hoped as I had been left feeling a little shaky after the climb.  Jacky was waiting at the bottom and we had a decent rest to let me recover before embarking on the final stage back along the Carron Valley to the finish line.  Now one of the things about this particular ride is that you think you have cracked it once you’re over the Crow and everything else is plain sailing.

There are at least two steepish climbs on this stretch and I must admit they did for me.  I suddenly felt like a wee 54-year old with a residual chest infection.  It didn’t help that I was so busy swearing a potholes in road at one point that I missed a turning and added a good ten or fifteen minutes to my time before I realised that I didn’t recognise the road.  Ah well. Wont do that next year.

But I finally limped back into the high school, only about 20 minutes after Jacky. I didn’t do it in under 5 hours like I’d wanted. But I did do it in slightly less time than last year which was good given that I was well below par and that I’d given myself that extra section.

On the day I felt that I had let myself down and I was quite despondent about it. Now when looking back while writing this, I feel I should be happy that I notched up a better time than previously and that while I am not improving in leaps and bounds, there is some evidence of better performance.

Notch it up to not being my best ride  but by the same token neither was it as bad as I’d felt on the day.