Now I’m not one to shirk away from a challenge. Indeed, those of you who know me will recognise that I actively seek out such animals, and by and large the more insane they are, the better.

So, my cycling challenges are (in no particular order except the first one which did seem somehwat of a pre-requisite for the others) 1. be able to go the damn thing without falling off too frequently, 2. master the use of clipless pedals (same goal qualifier as no. 1), 3. cycle 5000 miles in 2010, 4. conquer at least one endurance cycling event (min 200 miles), and finally 5. cycle a century ride (metric and imperial). It seems to be the case that no 1 had been achieved give or take the odd accidental visit to the ground already documented in the blog. And, as per my previous post, no 3 has been achieved. It became apparent that it was time to start tackling the tons, and where better to start that on my beloved island of Islay.

Enter the Ardbeg Committee 10-year anniversary Gourmet Ride. No prizes which part of that title was the unique selling point! Over we went on the stupid o’clock ferry, having had no sleep the night before on account of remembering, just as we were nodding off to sleep, that the road was shut overnight and a two-hour detour in place. Ah well. For future reference, should you find youselves in teh situation, dear reader, there is next to bugger all on the road from Lochgilphead to Oban at 4am on a June morning. Not even a polecat.

The ride was a marvellous affair. Featuring guest of honour Graeme Obree, it was most certainly not the “leisure ride” I had expected. It became apparent from the outset that it was for serious cyclists and that I would have to pull something special out of the bag to get round. Weather-wise, it was at the same time screaming hot sunshine and a howling wind. Combine this with hills (not little teeny mounds or gently undulating slopes but feckin great big ones) and you have a flavour of the event.

BUT! Never let it be said that I don’t rise to a challenge. Over 64 gruelling miles later I arrived back at Ardbeg distillery, knackered but havng successfully undertaken the ride. And I didn’t get off and push once. Think I’ll have to do a bit more training before the 100miles becomes likely. I’ll get there. 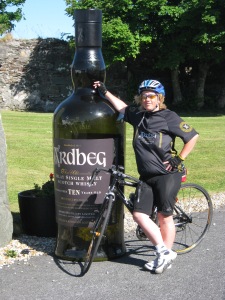 Now you see what I mean by it taking a lot of bottle! 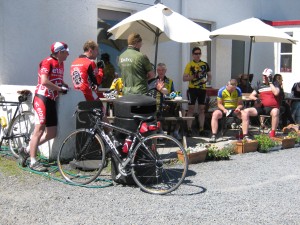 Afternoon tea at Debbie's Cafe. A pattern that is not cycling emerging do you think?

A former champion being very silly on a a tandem

Martin from Johnstone Wheelers enjoys a lemonade after the ride

What makes a Gourmet Ride a gourmet ride? Probabaly this.