Well now. Another giant leap for mankind achieved. Or at least another few pedals pushed towards my targets for 2010 in that I did my first ever full century ride today. And mighty proud of it I am too!

Despite a bit of frustration at my supposed ride buddies who fell by the wayside before it even was a wayside, off I set from Glasgow Green to pedal the 50 miles over to Victoria Park in Edinburgh along with the 8999 others taking part in the Pedal for Scotland event. I had decided that I would try to tuck in behind the first group of people – hopefully gals – that were travelling at the same speed as me. As luck would have it, it turned out that a former colleague of mine was in the group I attached myself to somewhere around Coatbridge, although I didn’t actually realise it until we stopped in Edinburgh. We all came back together as well. Great outward run in warm sunshine, but the return was positively bloody for the most part as the wind had got up and was in our faces the whole way. The A89 route we chose is apparently a wind-tunnel at the best of times so we shouldn’t really have been suprised. What I was surprised at was that I managed a 14mph average because there were times on the return leg I was really struggling with the wind. (Perhaps I’ll rephrase that) Anyway – the stats were: outward journey – 3hrs 3mins, return – 4hrs 3mins. Max 14% but mostly 2-7%. I’m happy. 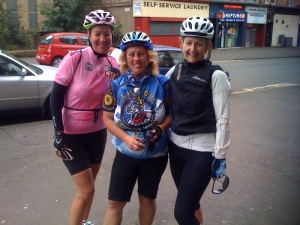