A week on and the snow is still lying. Well, when I say snow I really mean snowandice (or “snice” as my bonsai friend Jim calls it) as it has now frozen hard. All very pretty to look at and great for kids no doubt, but it’s getting very frustrating not being able to do anything bike or bonsai related. Some of the good people from Walkers went out on MTBs yesterday, but I decided against it as I have neither the MTB skills nor the confidence to be anything other than a liability in those conditions. I did make an attempt to get out and about as a few days on the turbo trainer was making me stir crazy, but it was rather short lived. I went up to the airfield with George who was meeting with another lunatic to test run some engines. Yep. In the snow. In the middle of a field. With a 1:3 slope to negotiate on the way out. In my nice BMW. I took the MTB with me in the faint hope that I could go for a short ride over to the reservoirs but within the space of 1 mile I had gone down on to the road twice. I promise I won’t show you the prettily coloured bruise on my arse. Just as well as I didn’t land on anything less well-padded.

The reservoir route abandoned, I then attemtped a run in the snow around the airfield. Sadly this yielded little other than the realisation that the snow was so hard and deep that the bike could stand up on its own. Well it did for at least 10 seconds before I did that slo-mo sideways almost graceful subside into a snowdrift. Why is it you know exactly what is going to happen but are totally powerless to stop it? I gave a certain degree of amusement to some cows so at least I made someone’s day with my classic comedy moment.

Ah well, back to the kitchen. At least Buddy had a good time today. and getting back up that slope did yield up a frisson of excitement (not to mention a few well-chosen swearity words) as the car slid back towards the wall. 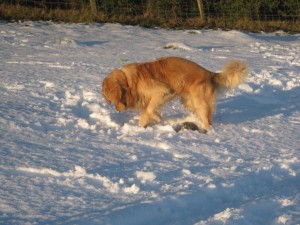