Every so often I go a little bit mad (there are those who might query the use of the phrase “every so often” there) and a case in point might just be my decision to take part in the Dip wi’ a Nip. Now there is, as you can imagine, a HUGE clue in the name there as to what this event might be. A contest to consume a small drop of the amber nectar while lying on a lilo in a heated pool at a luxury hotel perhaps? Or, if we’re apply potentially racist nicknames, my chance to go swimming with Ken Watanabe? Oh if only, if only to either of those but especially the latter. No, what this event was was my very own personal opportunity to throw myself into the Firth of Clyde at Prestwick on Boxing Day 2009. At this point I should point out that most British waterways fail to get above 5C – and that at the height of summer. What then would the temperature be in a large firth at the end of December – and a particularly cold and snowy December at that? Answer: aproximately 2-3C. Cold, but curiously not significantly colder than the Atlantic off the coast of Islay in July. But, on the basis that on its own that fact is not enough to justify the venture, the real question remains, why on earth would anyone do such a thing? Well two hundred or so someones did and all for the CLIC Sargent charity – probably the major charity for children with cancer and leukaemia in Scotland. The event took place on Prestwick seafront right outside the windows of Malcolm Sargent House and Buddy and I did our bit for raising some cash for this very worthwhile cause. To me a particularly sad facet of UK society that so much has to be raised for charities and research through the efforts of the public while governments play the war and weapons of mass destruction game. Notwithstanding that, I will continue to do what little I can and if being slightly daft one day a year is what this one takes, then bring it on.

As it happened, the water was not as cold as I’d expected althought I did chicken out of a full immersion. My excuse was that Buddy had taken off to say hello to another dog. What actually happened was he went in slightly ahead of me then turned round and took a slight panic when he couldn’t see me on the shore. He hadn’t recognised that I was actually alongside him and the look he gave me when he registered that fact was along the lines of “What the hell is that daft bugger doing in here?” – a question indeed that has been asked by many. Anyway he was my excuse to stay in the relative shallows as I felt getting in up to my waist was ample for the first attempt. Next year I’ll go for the full dook. What’s this “next year” stuff then?

Me an' ma dawg 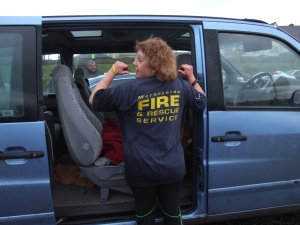