We have had snow on the ground now since December 21st 2009 – more snow than we’ve had for the past fifteen years put together I reckon. And, of course, it’s been below freezing so we are living on one enormous skating rink. Every time I look outside I fully expect to see Torvill and Dean Boleroing their way up Main Road. What it has meant is that it will be well nigh impossible to get the bike on the road until we have had a major thaw and some good west of Scotland rain to clear the muck away.

So, in the interim an emergency measure was needed if I was to make any headway on my target of 5000 miles before Hogmanay 2010. The result – yet another gadget to play with, this time in the shape of a Tacx Satori Blue turbo trainer.

I’ve been keeping an eye on these ever since I saw one being used at the gym by a girl who is a budding champion triathlete. I have previously viewed them as a bit of a gimmick (turbo trainers that is not triathletes), but she seemed to be making good use of it. Further investigation showed me that they have come a long way from the rickety devices of the past and so I decided to take the plunge. Not literally on this occasion.

So here is my bran’ noo toy – currently set up in the kitchen as it is way too cold in the garage where it will normally reside after I’ve negotiated a deal on repositioning a Honda Blackbird. 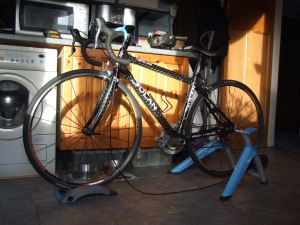 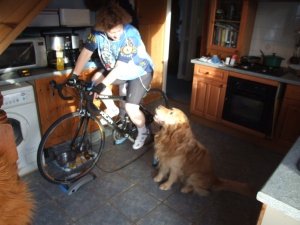 Buddy wonders if he'll be expected to run alongside 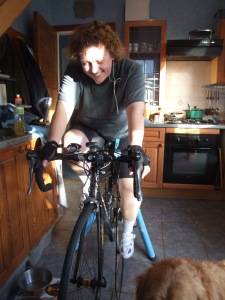