Now I like a bit of speed myself. Ah! Let me clarify that before either the cops or the ghost of my mother break down the front door – what I mean is that sometimes when I go out cycling I like to get the head down over the bars and just blast it. But there are other times when cycling is at its best when it is a voyage of exploration when you feel quite confortable stopping every hundred metres or so to look at whatever aspect of scenery, architecture etc. is in front of you. This is most always a feature of my Saturday rides with Alan and Matthew and it is a very pleasant antidote to the fast and frenetic pace of other rides.

Such a ride occurred today. I had decided to commute to work (despite it being the coldest day of the autumn so far) and used the free afternoon to go for a wee donner along the Renfrewshire roads in the glorious sunshine. Apart from anything else, it was the first real outing on the Surly so it would be interesting to see how it did over a longer distance than my Thursday night jaunt.

The route took me along from Renfrew to Bishopton and then up the Old Greenock Road to the Monkey House – so named because of the monkey stone statues adorning several roofs. This particular gem is Formakin House and it was designed by Sir Robert Lorimer for John Augustus Holms at the start of the 20th century. Holms planned and laid out the formal gardens before the house was was built, including a fountain, oriental and walled gardens, all joined by paths set with heart shaped stones. Somewhat of an eccentric, he did not suffer trespassers,and arranged tripwires in the grounds to catch out unwary visitors and land them in a muddy puddle. The house was built in the style of a 17th century mansion and its trueness to style is remarkable and fooled many experts. That the whole design was approached with a spark of humour is evident in the carved date of 1694 on a shield on one of the walls, accompanied by the letters DL, standing for Damned Lie The house was later owned by another eccentric, AE Pickard, who had a penchant for American cars but got bored when they broke down and simply left them lying about the estate while he swanned off in another purchase. Now transformed into several flats and smaller properties, it is nice to see the estate lived in again.

It’s little gems like this that make going out and about on the bike fun -and it’s especially worth it on these rare crisp but lovely days. Spirits were duly uplifted, and 30 miles notched up. And yes I did allow myself a little bit of a blast along the Georgetown Road just to see how the Surly did at speed. Marvellous all round. 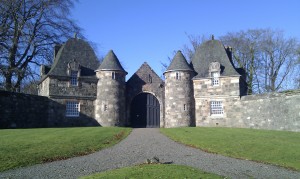 gateway to the grounds of The Monkey House 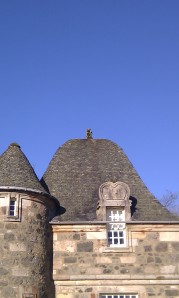 one the few remaining monkeys 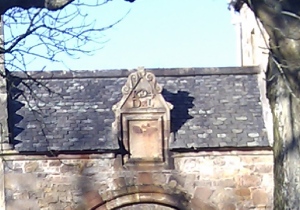