Now while I have owned a mountain bike for some twenty years, I most certainly don’t consider myself to be a mountain biker. I do enjoy going out on the MTB but in my lengthy career as an MTB phony, the extent of my adventurousness has been tootling around some forest tracks on the flat.  I did have one moment of excitement once when a corner inexpertly turned led to a downhill descent of a lengthy grassy knoll.  And while the bunny hop across the muddy ditch at the bottom was perfectly executed and really fairly spectacular even if I say so myself, I would have to admit that this was more a case of luck over any sort of skill or technique.  Add to that the fact that I don’t really think triple salchows (with pike) are meant to be a feature of MTBing – real or phony.

It was quite ironic then that so much of my 5000 mile tally of 2010 was achieved on an MTB, and I would have to say that a quantity of that was doing actual MTB rides – even if these were fairly untechnical and, I suspect,  of a level of tameness that real MTBers would kick sand in the face of.  Or maybe it would be mud as that seems to be a recurring theme in my MTB experience.

Even more ironic, then, that this MTB feartie was asked to go and recce a possible MTB route on behalf of Field Marshall Montwoodison.  The route in question was round Ladymuir Plantation, just off the back road from Lochwinnoch to Kilmacolm.  The key questions were, (a) was there actually a bike route in the first place as it is better known as a walking route?  and (b) does it link up with the Muirshiel trail?   So off I set astride the Cape Wrath, complete with my new disc brakes and therefore confident in the knowledge that I would at least be able to stop properly before I fell off when faced with the inevitable mortal danger such as those presented by loose bits of tiny pebble, an errant piece of grass, or a basking field mouse that was stupid enough to stop to admire the scenery.

The early section of the route was promising – dirt track followed by a decent enough grass track. Then the grass track suddenly came to a halt and was replaced by a precipice. Well okay – a slightly rocky gentle slope criss-crossed with tree roots leading down to a stream with an idyllic stone slab for a bridge across it.  Hurdle 1 duly coped with, the paths then reverted to grass with the odd bridge to cope with.  The path into the forest was less well-defined and considerably narrower. Though seldom actually wet, it was also fairly spongy underwheel as in essence I was on peat moorland.  Going through the  forest itself was a mixture of stony path and grass on peat.  With lots of tree roots protruding, the narrow paths and loose stones this was verging on being a technical ride. Well at least it was for me – no doubt the MTB black belts would have flown along like things possessed, but it was just on the outer edge of my comfort zone.  Nevertheless, the sun was shining and the quietness of the forest was rather wonderful.

The forest section eventually came out into a large clearing before heading off up to the main forest access road.  Had I gone straight ahead here I would have linked into the Muirshiel trail (and thereby have I answered the second of my key questions).  Instead I opted to turn left on to the forest road.  The relative ease of the broad, metalled section was short-lived as it reverted after half a mile or so to grass path again, this time along some of the old forest rides.  This was about the only mucky section of the route as felling work had left the ground somewhat churned up. But it was passable and eventually the path brought me back to the same point as I had entered the forest section. A quick huckle back up the hill and on to the main path soon brought me back to the car park.

All in all, this was a nice MTB route.  Easy-ish I should think  for those who know what they’re doing, but still achievable for big Jessie Sunday MTBers like me.  As long as you’re prepared to go at Big Jessie speed.  Or as we know it more technically – ruddy slowly. 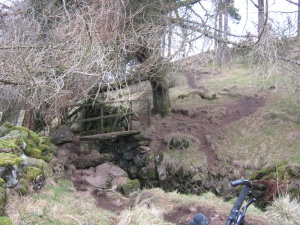 The stone slab bridge. Cycle across this and I'd give you my last Tunnock's Teacake 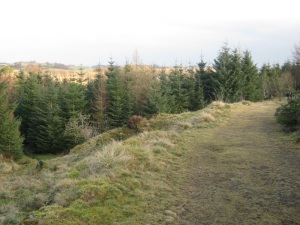 the broader path up to the forest

the way through the woods 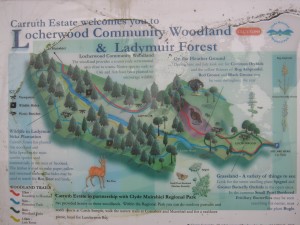